Skip to content
Date: 2016-10-01Author: Sheisnotlost 0 Comments
India is a land of diversities. Various climatic conditions have made India a diverse country. In all spheres of Indian life diversities are clearly visible. These diversities have made the Indian culture a unique one.
Like all other aspects of life, the dance forms of India are also varied and different. There are many types of dance forms in India, from those which are deeply religious in content to those which are performed on small occasions and some that represent the culture and ethos of a particular region or a group of people.
In order to discover various folk dances of India as a feature in my blog,  I happened to learn about Pulikali- Pulikali is a colorful recreational folk art from the state of Kerala. It is performed by trained artists to entertain people on the occasion of Onam. It means Play of Tiger. In Malayalam (language of Kerala) Puli means Tiger and Kali means  play. Striking feature of this folk art is the colorful appearance of the performers. To get the resemblance of a tiger artists paint themselves in bright yellow with patterns of black and red. A tiger mask on the face completes the get up. t’s not just the tigers that are featured. Black panthers, lions, cheetahs and leopards are also represented.
The origin of Pulikkali dates back to over 200 years, when the Maharaja Rama Varma Sakthan Thampuran, the then Maharaja of Cochin, is said to have introduced the folk art, who wanted to celebrate Onam with a dance that reflected the wild and macho spirit of the force. Now the festival is vastly celebrated in the state but has a special procession in a place called Thrissur. A particular combination of tempera powder and varnish or enamel is used to make the paint. First of all, the dancers remove the hair from the body, and then, the base coat of paint is applied on them. It takes two to three hours for the coating to dry. After that, the second coat of paint is applied with enhanced design. This entire procedure takes at least five to seven hours. A large number of artists gather to apply paint on the tigers. It is a meticulous process and often starts from the wee hours in the morning. By afternoon the Pulikkali groups or ‘sangams’ as they are called, from all four corners of Thrissur move in a procession, dancing, pouncing and shaking their bellies to the beat of the drums through the streets. 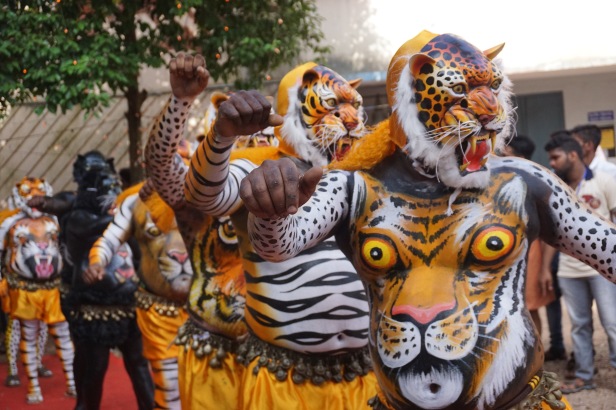 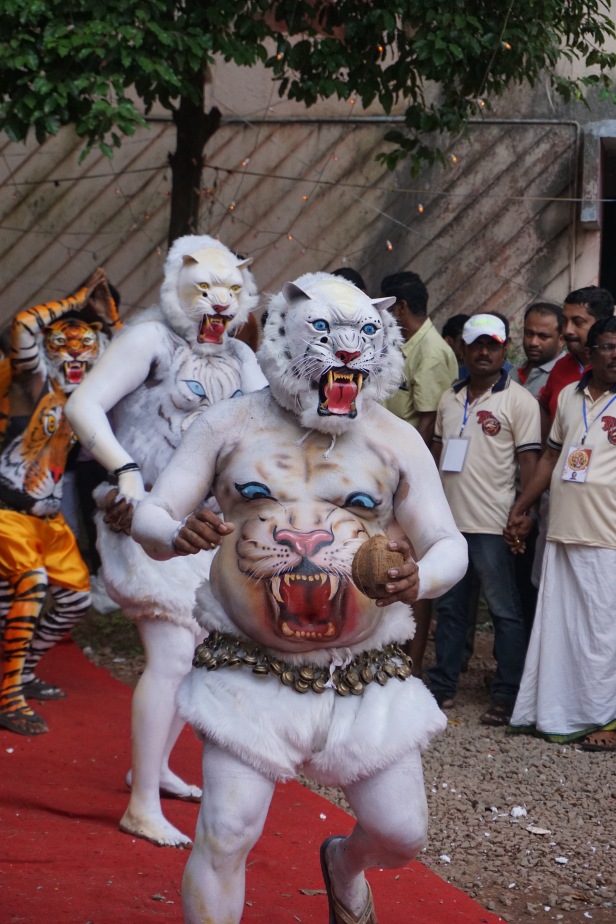 I learnt about this dance when I saw a couple of men dancing on the streets as part of Onam celebration a day before Onam. I started to find out more about it and learnt that I shall visit Thrissur 4 days after Onam to see the real dance. On reaching Thrissur around 4 in the evening I was overwhelmed to find thousands of people on the busy junction of the town. Over 1000 people had participated as dancers this year. Scenes such as the tiger preying on an animal, and a tiger being hunted by a game-hunter were being enacted beautifully in between. Thousands of spectators lined the streets enjoying the dance, cheering the dancers some of them even trying to join in. 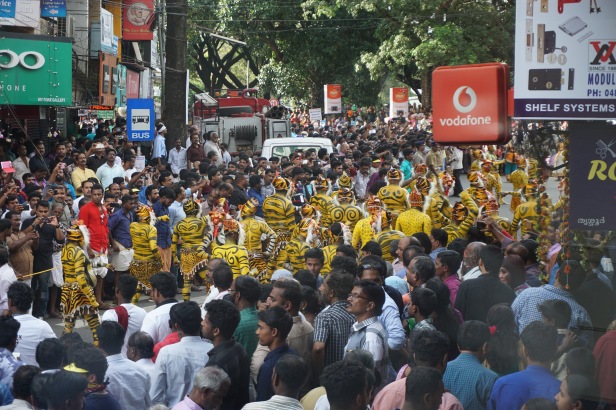 The spirit of men dressed as tiger was amazingly sportive and they were inspired and cheered by a crowd of thousand spectators who had lined up to witness this annual event. At 36 degrees celsius it is not easy to wear enamel on the body. Such traditions and cultures are meant to foster the spirit of various communities which is commendable for any society. Engaging people in small towns where there is not much to entertain, such initiatives come as refreshing experiences and tiger roars continue to be felt as laughter and happiness amongst the people for rest of the year. I had never witnessed a dance like this.
Have you witnessed a dance like this?

Every time you leave home,
Having traveled and lived in many places over the years, I’ve made friends from around the world. I can go to many countries and stay with friends (locals) who are happy to show me around, friends who will take me for a traditional local meal to their house, an impromptu town BBQ event, or a festive celebration. It’s easy for me to get a taste of local life because I have many people willing to show it to me. It’s the same for anyone who has traveled you’re going to meet people from all around the world that you can visit
The first digital camera came into the market sometimes in the 1990s, and by 2010 most of us had made the switch from film to digital. Being able to take as many photos as you liked and instantly being able to see if they were any good has helped up our photography skills. Isn't it? I take almost as many photos in a week now as I did in my whole childhood on film camera 🙄
For me the most important aspect of a trip to a new place is to always merge into the surroundings. Get into the local life of the place you’re in, and take the chance to experience a few days of what the locals experience on a daily basis
Minimalist or Clutter
Do you know why the sky bursts into many colors during sunset?
Happy Birthday to my Little Angel @shrutisuri
No matter where you go, every single place in the world has the potential to change your life!
Follow she is not lost on WordPress.com