Most of us share a fascination with Pakistan! I have visited the Wagah-Attari Border many times witnessing tall people from Border Security Force (India) and Pakistan Rangers (Pakistan) march, salute, stomp and enact aggression. Respective country folks are incited to cheer for their country and the audience is more than happy to indulge in the shoutfest.

Just before sunset, the iron gates are opened. The flags are simultaneously lowered and folded. Then the soldiers retreat with the flags and the iron gates are shut. It’s a strange ceremony between two countries that share so much history and animosity. It’s interesting nonetheless and it’s the closest I’ll probably get to that side! that side of the border but I mostly knew the closest I can ever get to Pakistan would be only to the Wagah-Attari Border. Attari is the name of the village on india side of the border and Wagah village on Pakistan side. 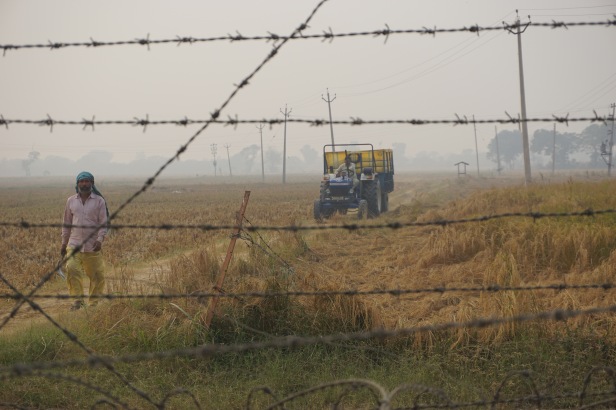 Farmers in the fields

Last month I visited the Wagah-Attari border to get a different view of this historical landmark so instead of moving straight towards the Wagah-Attari border I took left turn just one kilometer before the main ceremonial gate. Unsure of what lies ahead and if I will be allowed to enter the village during this intense times post surgical strike, I fearlessly drove on the muddy road surrounded by half grown fields. Women and men farmers were sheltering under banyan tree relishing lunch. As I drove further I stopped to check with a villager if it was safe to drive ahead. With a long smile and hearty warmth he said “Sat Sri Akal” and gave me confidence to move forward fearlessly. The intense thoughts passing my mind of being on a border seemed to start relaxing as there was nothing intense around. Cows and buffalos were grazing the fields, a few old men were sitting under a tree playing cards and listening to Punjabi music. After covering a distance of 2 kms I was astonished to see the fence that marked the boundary of India-Pak border. I was now at a different stretch of this border. Yes I had made it.
Across the gate was Pakistan! I looked that way more than I watched the Indian side- so tantalisingly close, yet so unreachable. 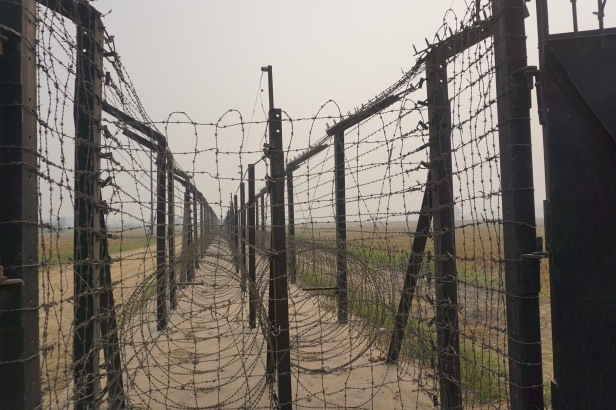 Fence between the border

Two BSF (border security force) soldiers got alert and started to walk towards my vehicle as I was approaching them.  On expressing my desire to see the border, they firmly said it was a no civilian zone and a special pass to visit this area is must. Soon the conversation eased as I passed my wishes for the upcoming biggest Indian festival of Diwali.
It all looked the same, this side or that side. The realization of the fact that I was standing on the border and could see Pakistan was enough to rekindle all the stories I listened to from my grandfather who lived with the pain that he had to leave Sialkot (now in Pakistan) during India Pakistan partition in 1947. He always got emotional whenever we visited farms to pluck vegetables as our early morning rituals everyday. Yes, The farms on both sides of the border looked the same. At this moment I wished he was here and I could hold his hands and give him a handful of sand from the other side which he always called home. It had taken years for the psychic numbness to communicate that my grandfather (refugee) experienced during partition and I am not even sure if he could tell all he wanted. 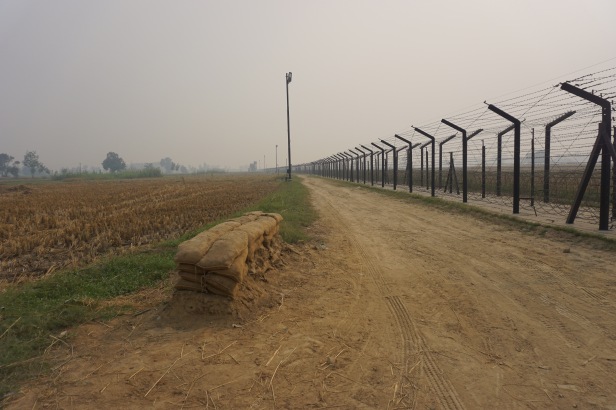 Madan and Mandal from Jharkhand and Kolkata respectively stand on this post 20 hours at a stretch. If soldiers were getting six hours of sleep before hostilities grew, they are now making do with barely four hours. They had not seen their families for three months now and had no idea how long they will continue to serve such long hours. The village Attari is 3 kms away from Pakistan. The village is thickly populated and the houses are located 200 meters from the fence which makes this area crucially sensitive for any attacks from the other side of the border. 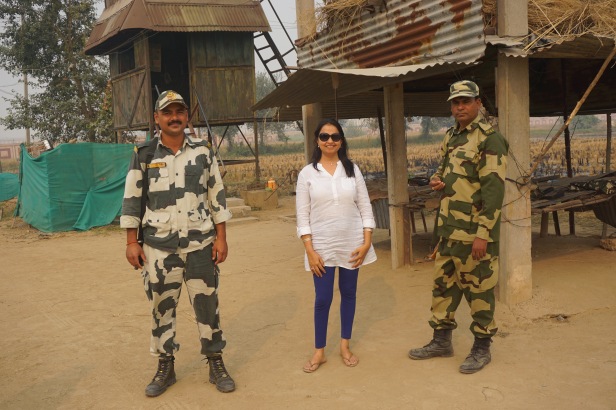 With Madan and Mondal

The life on this border is no different as it is narrated by many sources we read and watch but the intensity at which the border needs to be protected by our soldiers makes life tough for them.
After spending 30 minutes with Madan and Mondal I bid a teary eyed goodbye and wished the hope of returning back home, safe and sound.