I have just returned from my first ever snow trek in the Himalayas – and I am left with a transformational experience that is going to be tough to articulate in words. As I type, I have a tingling sensation running through my body, not only because of the feelings it evokes within me, but also because of my still-recovering frost-bitten skin.

Just a couple weeks ago over coffee with my team, we were thinking of some adventure to explore over three days that we had as a team building annual exercise. We traveled half the globe over that thirty minute conversation and rejected all ideas due to the shortage of time. Suddenly a message from one of my dear friend, Rahul, based in Dalhousie popped up on my phone and I declared, Dalhousie it is. “Serendipity”, I thought!

Two weeks later, Eleven of us ventured into the adventure in the month of January. A night before Rahul called me and informed of the blizzard they were struggling with. As we were already en-route, It dampened my soul but not the spirit. We were determined to spend these three days in the pine valley overlooking the Pir-Panjal range. After changing five vehicles and almost 5 km walking in the snow (the roads were closed), we reached Dalhousie after 26 hours of  being on the road.

For these 3 days we found ourselves embarking on walks in the most gorgeous surroundings, crossing ice cold streams on broken planks of wood, scaling heights on loose gravel and even sliding down snow-clad slopes! In the past, I’ve trekked the mountains, glaciers in various parts of the world, but I found myself completely exisitng  with Nature – literally asking of me to nestle in her lap and to embrace her loving offerings. At various points, we were also confronted with her unpleasant side, which forced us to our limits – and truly questioned our faith in the friendliness of the Himalayas. At each point, it allowed for an interesting dynamic within the group of 11 of us who made the trek together. For the 3 days, 11 of us were constantly being thrown into situations that tested the boundaries of our human existence. Frozen water pipes, stiff legs, chilly winds and of course the long walks.

It was on the second night when the real exploration happened. Six of us decided to head out in the forest for snow trek at 1230 AM. We had already trekked 25 kms in the snow that day and were trying to warm ourselves near a bonfire when suddenly I felt the need to go out there and try to co-exist with nature. Within no time 6 members of our group followed without questioning and that is when I felt the power of TRIBE that we are!  We held each others hands through loose snow that refused to give us the grip to walk stable, made human walls to avoid chilling winds hit us and make our bodies more dehydrated. While we were busy trying to ascend holding each others hands, a look up in the sky made me stay in that point of time and I was awed by the way sky looked. I sighed and halted, All I could see was a huge circle of Pine trees standing tall on the snowy bed, trying to touch the luminous star-studded sky. I had never seen stars that dense in the sky ever. Something so sensational and hypnotic that my eyes still refuse to believe, something that I can never put in proper words. With a twinkle in our eyes, We all stood in a  circle embracing each other, with our mouths open, legs frozen, eyes wide and chests being thumped with loud heart beats.

Standing there, gazing up at the spectacular sky, I thought of the last phone call I made to my Mother, and how glad she was to know that I was fine; how she was always mad at me for not being expressively affectionate like my sister and brother. I thought of my father how much pride he takes in the little that I do and the loads of expectations that he has. Never had I thought so deeply about existence. And suddenly It hit me that we were in the forest where Rahul had warned me not to step in as it is densely populated with wild bears and stepping in there after 10 pm can be dangerous. I was leading the group with 5 more lives. The thought sent a shiver down my spine and my legs trembled; as much as I love danger, what right did I have to put their lives in danger? We quickly took a u turn and Continued to move as fast as we could and not paying much heed to how critical the scenario was, we walked into a situation where all our positivity sank to a new low. Thinking of the wild bears I could feel my heart beat from the naval to the jaws. While I was descending helplessly , It made me think about my life – in all these last few years,  how limited our capacity is that we have to surrender everything to the vast expanse of nature; at this time it was to the weather and animals. Though satiated, I was constantly questioning my existence as an alien on this planet where animals could co-exist much easily with nature than humans.

During these three days I had the gift of seeing how as a team we could hold one another through our ugliest. and I’m not talking just about our physical appearance (which wasn’t impressive after 3 days of not bathing 🙂 ) but the ugliest facets of our psyche. Interestingly, our circle held it all. With people opening up and sharing parts of their life that they hadn’t dared to offer to any others in their regular lives. Conversations about personal relationships, how we view our lives, our limitations, our joyous moments were all held with a lightness. All of it flowed without inhibition, perhaps because it seemed insignificant after getting lost in those hills with no water and trudging through loose snow in feet numbed by the ice looking for our campsite. 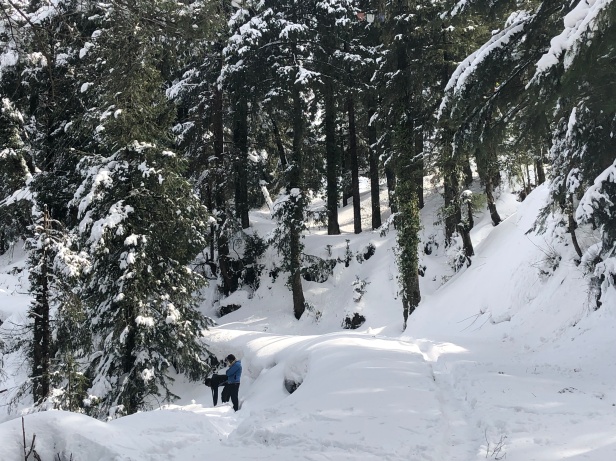 I knew I had lived the experience that I came here for. Even more! But surprisingly, towards the end, I lost the desire of going back home this early. I wanted to stay a little longer.

This journey will always be emotionally significant to me, a touch above all the others. A journey that I shall embrace forever; most of it because of the lifetime friends I made.  Being a solo traveler I learnt that traveling with your tribe can be an amazing experience too. Thank you guys, for being a part of this one, and for being such an amazing team. I am not forgetting that mid-night conversation ever in my life.

P.S-We stayed at Alps Resort a beautiful, tranquil resort tucked away from the crowded town of Dalhousie (en-route Khajiar) with an amazing set of people hosting us that made our trip even more memorable.